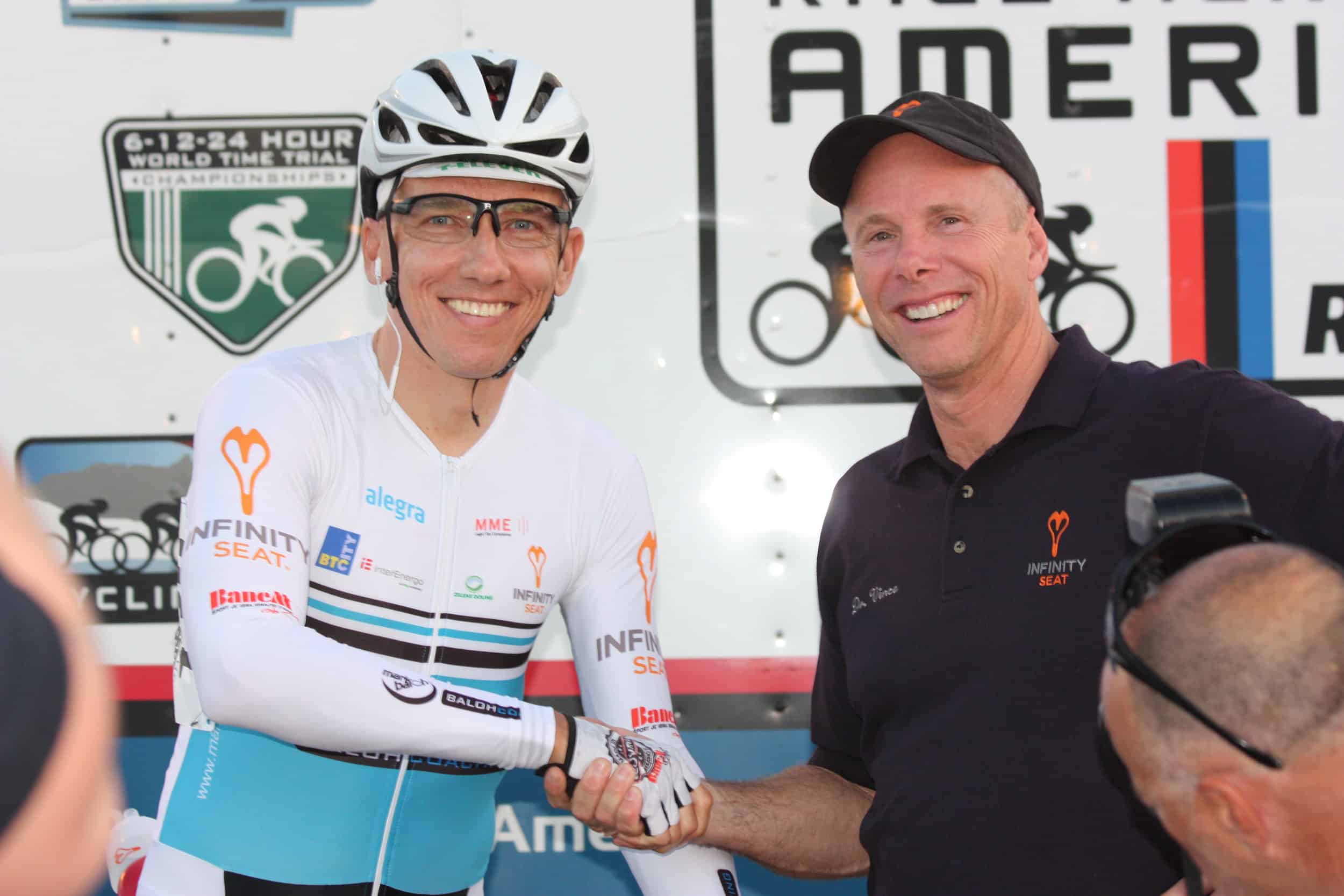 Press Release – The Road to RAW and RAAM

‘Competitors prepare for the longest endurance race in the world’

El Segundo, CA – Each year a few hundred entrants compete in the RAW and RAAM race course.  The cyclist is well trained and focused on riding their bicycle for long periods of time with little to no sleep while trying to take in calories and avoiding discomfort.  The race begins in Oceanside, CA and continues across the west with RAW ending in Durango, CO.  Riders complete 860 miles of the RAAM route.  RAAM riders continue to Annapolis, MD completing more than 3,000 miles on their bicycles.

In its 36th year, Race Across America (RAAM) is one of the most respected and longest running endurance races in the world.  Racers must cross 3,000 miles, 12 states and climb over 170,000 vertical feet.  The race is 30% longer than the Tour de France and cyclist have 12 days to complete the course, start to finish.  RAAM is open to professional and amateur cyclist, solo and team riders.  People come from all over the world to participate and have annually raised millions of dollars for charitable donations.

During the training season, competitors are preparing for the race and gathering supplies, making travel plans, collecting finances, building a strong team, preparing for extreme weather, training like crazy, and in search of the right gear to avoid discomfort.  Marko Baloh of Slovenia has competed in nine RAAM competitions so far.  During training for the 2016 RAAM, Marko met Dr. Vincent Marcel, chiropractor and inventor of the Infinity bike seat.  Dr. Vince has been an enthusiastic triathlete for more than 20 years, competing in countless triathlon and Iron Man competitions.  Based on his experience, Dr. Vince realized the importance of comfort when riding his bicycle over 100 miles at a time.  He began researching bicycle seats nearly four years ago, and designed and produced a prototype for his new “Infinity” seat.

The two enthusiasts stayed in contact via email, and skype.  When Marko came to the United States they had the opportunity to meet and share information.  Marko decided to include the Infinity Bike Seat in his equipment checklist as he prepared for RAAM 2016.  During the last phase of RAAM Marko was experiencing severe saddle sores and Edema from the high altitudes.  At that time, he decided to try the Infinity Bike Seat to complete his course.  To his delight, Marko stated, “The Infinity seat has saved my butt (not only figuratively) in this year’s RAAM. Hadn’t I got it, it would be very hard for me to finish the race, I am so looking forward to my next RAAM, at which I will ride the Infinity from the start. It will make a World of difference!”  Marko went on to place 3rd in the 2016 RAAM competition.

Now that a relationship was established the two enthusiasts began working together on nutrition, training and building stamina.  Earlier this year Marko came to the United States to compete in the Joshua Tree Double Century.  Dr. Vince explained the importance of good nutrition being a key factor in Marko’s success during his race.  Marko also received some Hyper Baric Oxygen Therapy (HBOT), along with nutritional supplements and a regimen to optimize his performance when riding his bicycle.  To his delight, Marko went on to break records completing Joshua Double Century in 9 hours 26 minutes, and then beating his own record in the Solvang Double Century race completing the course in 8 hours 44 minutes.  Marko credits the hard work he put in training and the final boost he received with nutritional training, HBOT, and his Infinity bike seat which has been a game changer for him.  “Thinking of it, what comes to mind is that every endurance racer would kill to find a solution to the saddle sores problem. And now, you don’t have to kill anyone, all you have to do is try out the Infinity seat. Thank you, Dr. Vince!”

The classic bicycle seat centers the rider’s weight onto the sit bones (Ischial Tuberosity) and pubic bones causing pinching and discomfort, decreasing performance, endurance and creating health problems for the average cyclist, male or female.  The Infinity Seat alleviates contact with unique cutaways that distribute the rider’s weight on to the outside of the saddle. This allows the water, fat, and muscle to absorb the alternating pressure strokes on each buttock.  Simply put, you become your own shock absorber.

Research on patents was conducted as far back as the late 1800s. Barring a few creative departures; the bicycle seat has remained basically the same uncomfortable design. Because the Infinity Seat is designed to accommodate the rider’s skeletal structure, it fits indiscriminate

of muscle mass and body type.  The saddle fits almost everyone.  The innovative design fits most bikes including tri., touring, mountain, electric bikes and even beach cruisers.

“I started the Infinity Seat because I felt the need to create a saddle that a common cycling enthusiast, such as myself, has been yearning for.  Now, the Infinity Seat is helping professional cyclists worldwide.   It is very gratifying when a humble cyclist such as Marko Baloh of Slovenia, switches to your saddle and tells the world when you’re doing one the of the most prestigious races like RAAM, that the Infinity Seat saved his ass! Thank you, Marko,” comments Dr. Vince.

The Infinity Bike Seat has been used in the last four RAW/RAAM races.  This year was the biggest so far, with 15 riders using the Infinity bike seat from the start.  The results from this year’s RAW race include first place winner Marcello Luca of Italy,  second place, Charles Bell of the United States, third place with Andy Christensen from Denmark, who is now a citizen of the United States and fifth with Walter Cadamuro of Italy.  Our RAAM finishers include Marko Baloh in second and Mark Gibson in fourth in their division.

Marcello Luca of Italy completed the 928.41mile RAW course in 2 days 15 hours 8 minutes.  Once completed, Marcello had this to say “The seat is a very important component for every ultracycling race! And Infinity bike seat is the better!”  This year there was severe weather along the course, freezing temperatures in the evenings, rain, hail and high temperatures during the days.  These are the many factors that impact the riders besides little

to no sleep throughout the course of the race.  Riders are forced to eat and drink while riding and usually take in more than 8,000 calories per day while riding the course to replenish themselves along the way.  This year Marko reports his toughest RAAM so far impacted by the severe weather and technical difficulties in his travel RV.  Marko finished second place in his division (Solo Male 50-59), with a completion time of 10 days 12 hours 12 minutes.  At the start of his last 100 miles he quoted “Last miles to be done, Marko is not a quitter” – he crossed the finish line riding in through the rain.