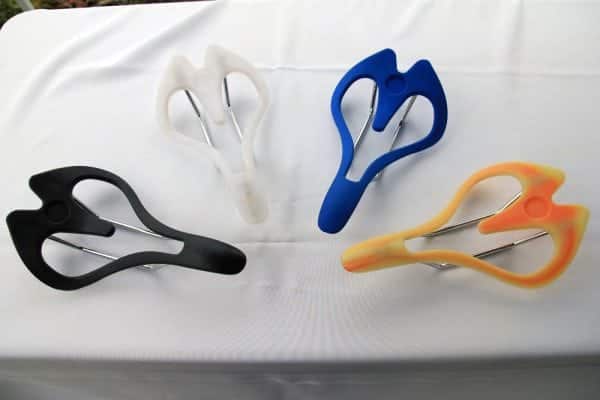 Einstein was credited with saying something along the lines of, “if at first, the idea is not absurd, then there is no hope for it.” When you first look at the Infinity saddle you may very well think that Vincent Marcel’s idea is absurd, but he’s right. There really haven’t been many major changes to saddle designs in their 200 year history. In his quest to find the perfect saddle, Vincent took a completely different approach to saddle design and basically inverted the standard seat. Drawing on his experience as a doctor chiropractor, he thought instead of using a convex shape where your sit bones rest on top, why not use a concave design so that your sit bones rest inside the cutout supported by the muscle instead of pressure on the bones.

Sounds crazy. Does it work?

As any good tinkerer would do, Vincent started by simply carving a block of wood to try and get the basic shape. Next, he removed the padding and cut out sections of a standard saddle which eventually led to the first prototype after a number of hours designing and testing. Eventually the final prototype on the right was born with the basic shape of the Infinity saddle.

After the prototyping phase, Vincent started working to get the saddles produced after an extremely successful Kickstarter campaign. In addition to figuring out the covered saddles, they produced two models both made completely in California, the Infinity Go and the Infinity Carbon/Kevlar. Both saddles have zero padding and instead rely on the flex of the saddle and the shape for comfort. The Infinity Go uses a straight nylon base while the Carbon  uses a nylon glass base which is a bit stiffer, while the carbon/kevlar will have removable covers so you can custom tune the looks or ride. The Go saddles use a carbon steel rail while the carbon saddles have the option for full carbon rails.

There was also this injection molded padded Infinity Revolution on hand which will have a bit less padding for production. So how do they ride? I have to admit they are much more comfortable than you would expect. One thing to keep in mind is that they seem like a one position saddle meaning you can’t move around on the seat like you do on a regular seat. Because of that it seems that set up is critical and will take some adjusting to get the position just right. Currently there is only one width, but Vincent said there will be different widths available in the future which should provide more options. I would either gravitate to a different width or the padded saddle for my liking. It may be crazy, but it seems like the Infinity seat could be onto something.

Through testing at Cyclologic in Scottsdale, AZ, the saddle’s pressure mapping showed reduced pressure and friction heat compared to other well known saddles. According to Vincent, the tester was so impressed that he wanted to do more testing of the saddle in Germany.

As for weight, the Infinity Go weighed in at 192g, the Infinity carbon with carbon rails was 173g, and the carbon with steel rails was 246g – which is likely due to the additional cover compared to the Go. Currently the saddles measure 290mm x 160mm. For more information, check out their site.